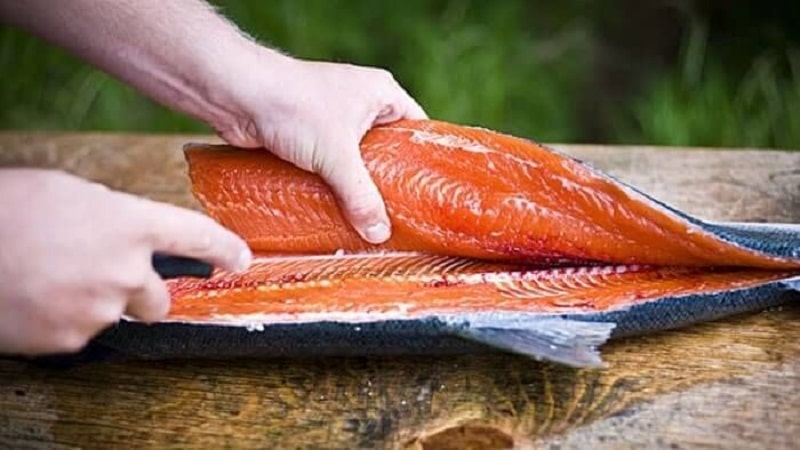 How to Falay a Fish

After a great day of fishing, you have probably landed a few fish for a satisfying meal. You must keep your catch well stored before you decide on when to prepare it. While most of the people may prefer cooking small species whole, large species like the salmon and largemouth are usually falayed or filleted.

Filleting a fish means separating the meat from its bones. In this article, we look at the step by step procedure on how to Falay a fish.

Contents show
1 1. Bleed out your fresh fish to preserve it
2 2. Descale your fish
3 3. Remove guts by opening the fish’s stomach
4 4. Chopping off the head
5 5. Cut away Fins on the top, side, and undersides
6 6. Run the fillet knife down the spine, precisely from tail to head
7 7. Run the knife on top of the rib cage instead of through it
8 8. Repeat slicing on the opposite side of the fish
9 9. Cut each fillet into pieces called steak
10 10. De-bone the fish fillets
11 11. Skin the fillet
12 12. Rinse the fillets and store

1. Bleed out your fresh fish to preserve it

Using your knife or scissors, create a shallow incision under the gills, and snap the fish’s head backward to break its spinal cord. Thread a rope through the gills to the mouth and allow it to bleed.

This will preserve its texture and taste. You can then place it in ice until you’re ready to descale it.

Use the back of your knife and long strokes to scrape off scales from the fish. Always work in one direction- from tail to head. You can alternatively skin your fish after filleting to remove its scales.

This step is not crucial as some people enjoy their fish with scales.

Beginning from the tail, make a deep incision running all the way to the body and towards its head to open it up. Remove the guts from the fish’s stomach using your hands in gloves then rinse out any remains using cold water.

Gutting is such a nasty process, so ensure you have a trash bin by your side to drop in the remains. Clean your counter after use to avoid gross contamination.

4. Chopping off the head

Cut off the fish’s head with a knife right at the point where it is connected to the gills. Insert a lot more pressure and cut through the spine to separate the head from the body. The head can then be discarded or placed in ice to be used later to make stock.

5. Cut away Fins on the top, side, and undersides

Using your scissors, cut off Fins from both sides of the fish to give you precise work when making cuts. You can also do this step when descaling but ensure it is done before you begin filleting the fish.

6. Run the fillet knife down the spine, precisely from tail to head

Starting from the tail’s base, slice through the fish following the backbone in slow and gentle motion. Avoid cutting it roughly or sawing it away. As you do this, keep on lifting your sliced pieces to make sure you’re making a straight cut across the fish’s backbone.

7. Run the knife on top of the rib cage instead of through it

The Rib Cage’s shape will give you the direction in which you will work and helps you avoid sawing across the bones. You can, later on, remove the bones using tweezers.

8. Repeat slicing on the opposite side of the fish

Turn your fish, such that the spine is in direct contact with the chopping board and smoothly run your knife from the tail to the head. Be extra careful on this side since the fish has a lesser grip unlike before. After this point, you will now have two fish fillets on your countertop.

Using your chef’s knife, cut out slices of about 1.5 inches thick for easier grilling and barbecuing. You can use the leftovers for making stock or kids’ steaks. For this process, you don’t have to remove bones to maintain the shapes when grilling.

Using a boning knife or large tweezers, carefully remove the bones from your fish fillets. You can feel the bones in the middle of the fillets.

Identify the point where the flesh meets the skin and carefully cut away the skin, firmly grasping it to separate it from the meat. This isn’t also necessary as some people prefer having their fish with its surface. Be sure also to remove excess belly fat from your pieces.

12. Rinse the fillets and store

Run fresh cold water over the fillets then pat them to dry using a paper towel. Voila! The fish is now ready to eat. If you’re not going to do that in the next two days, wrap them in tight plastic wraps, then into ziplock bags and store in the freezer. This can last up to 3 months.

How to Choose the Best Dishwasher