Psyllium is a healthier and more organic alternative to the artificial laxatives found in the market today. This natural bulk-forming laxative works by relieving constipation, treating diarrhea, boosting metabolism, helps with diabetes, reduces the risk of cardiovascular disease, and also helps with weight loss.

The psyllium husk powder may also be used in baking recipes for people on a low-carb diets as well as those with gluten sensitivity. However, since psyllium husk powder is a fiber that’s soluble in water, it retains too much water which causes the baked bread to become too crumbly. The taste and texture also don’t quite satisfy some chefs who are on a search for the perfect replacement.

What Are The Side Effects?

Since the psyllium is not digested in our large intestines, this may result in the production of excess gas or other digestive problems like bloating and discomfort. In some extreme cases, consumption may cause internal blocking although that’s rare. You should take lots of fluids to reduce these symptoms.

Psyllium affects the absorption of medicine since it forms a bulk in the intestines. If you’re on any prescribed medication, it’s advisable that you consult your doctor before taking any psyllium husk powder. If you must, wait at least 2 hours after you have taken your medication.

This leaves one to wonder if there really is a good psyllium husk powder substitute.

Considering all its benefits, it can be quite hard finding another option that checks all the boxes. We put together a list of 10 items that you may use as substitutes for psyllium husk powder that are still gluten-free, nutrient-rich, low-calorie, and low-carb. These are:

This is also referred to as linseed and it tops the list for psyllium powder substitutes. It’s a gluten-free option that’s commonly used in many vegetarian and vegan diets.

Flaxseed is high in magnesium, minerals, phosphorous, and vitamins. It’s also an great source for fiber, healthy fats, omega-3, and antioxidants such as lutein.

Besides, there’s some compelling evidences that it contributes in lowering the risk of diseases such as heart complications, cancer, stroke, and diabetes. Quite a tall order for a tiny seed, which help it to build the acquaintanceship of the most powerful plant foods on the planet. 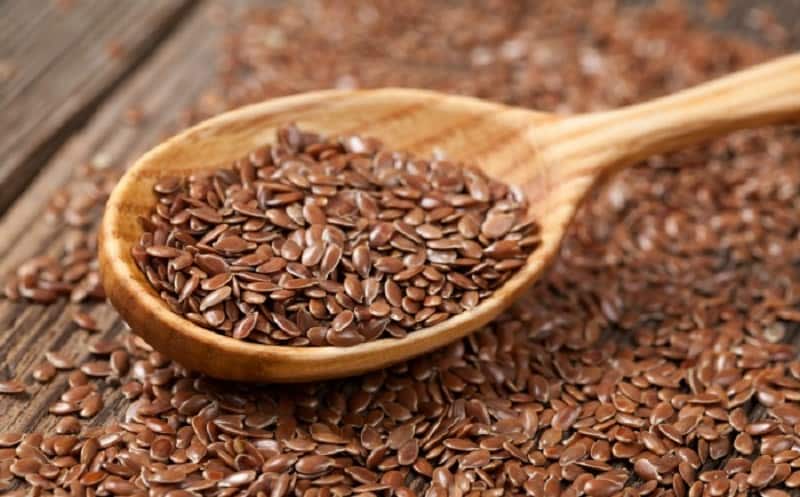 These are quite similar to flaxseeds in that they have lots of antioxidants, fiber, omega-3, essential fats, manganese, copper, selenium, and other nutrients.

Ground chia seeds may be used when baking or even added to smoothies – the only downside is that just like flaxseeds, chia seeds have some extra calories.

But, consist a decent, indeed very high amount of protein compared to most plants, and among one of the most weight-reduction dietary nutrient. In addition to offering various health benefits, a high protein substitute such as Chia seeds result in reduced appetite, hence less food intake and low calorie consumption. 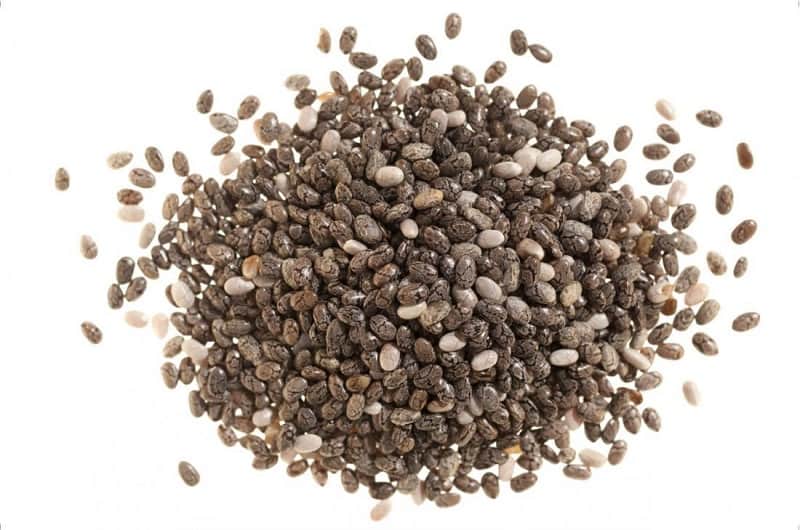 This soluble fiber is commonly used as a thickening agent for stabilizing liquids when cooking or baking. Due to the fact that xanthan gum is added to liquids to make them more viscous, it’s used in yogurts, jello, soups, sauces, and puddings.

It swells up when eaten making you feel full. This is helpful in reducing calorie consumption and slows stomach emptying for weight loss purposes.

Xanthan Gum has also been shown to be an effective co-therapy for people with dry mouth. Besides, in people with diabetes, Xanthan gum is used for lowering blood sugar and total cholesterol. Has also a widespread use in treating constipation. 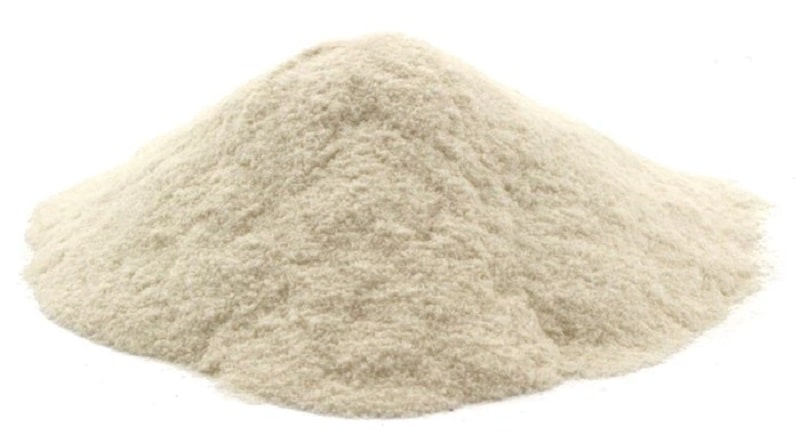 Cornstarch is gotten from corn kernels and is a commonly found in processed foods. It’s gluten-free and is, therefore, used to make wheat-free dessert fillings.

Additionally, it’s used to thicken syrup and candy in confectionary factories as a way to create better consistency. Its anti-caking properties keep the tiny particles from being clumped together.

It’s highly likely that you already have cornstarch stored in your kitchen. If that is not the case, corn flour still one of the easiest swaps for psyllium husk, since can be found in every nearby store. Use twice as much cornstarch as you would psyllium husk, if your recipe consist baking. Besides, for other recipes too, ratio remains roughly the same. 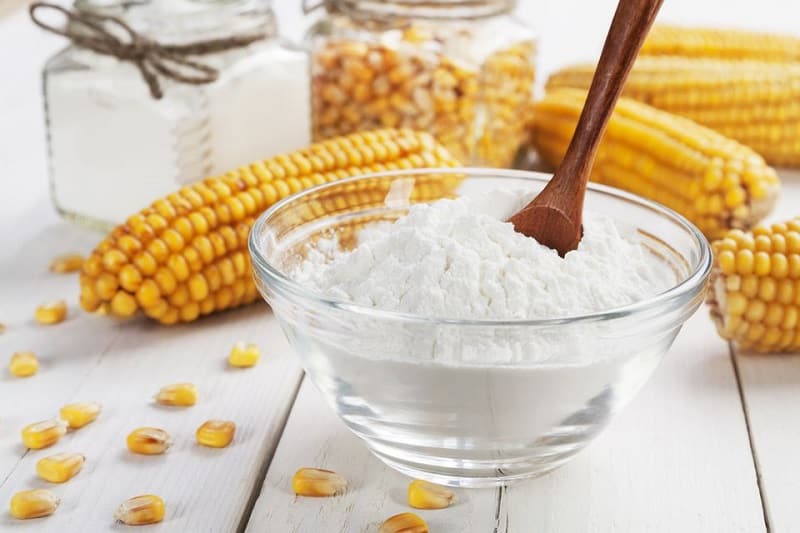 This gluten-free powder is used as a thickener that can take the place of psyllium husk powder. This flavorless natural additive is mixed with water to form a thick mixture that may be used to thicken gravy, and fillings for acidic substances. This property makes arrowroot powder a better option compared to cornstarch which can’t be used with acidic substances like cranberry juice.

Increasing your intake of Arrowroot Powder may promote healthy digestion and boost metabolic rate. It’s an antidote for poison that also has a notable contribution in kidney functioning and healthy sleep. However, excessive use might result in constipation and stomach discomfort.

This gluten-free powder is made from the root of a cassava plant that has been made into a pulp. It is excellent for sauces and pies. Tapioca starch is perfect for people who aren’t supposed to eat corn or potatoes.

Largely used in thickening sweet and savory dishes such as sauces, soups. Nevertheless, when used in dishes, it adds a pleasantly chewy taste in the food. You might know tapioca as the base of a sweet pudding, however culinary use of this inexpensive and widely available alternative is getting immense popularity throughout the world. And, as a psyllium husk substitute, just swap it out in a 1:1 ratio.

This is made from crushed seeds of the hemp and can be used to give a strong nutty flavor to baked bread, muffins, cookies, and waffles. Hemp flour is rich in omega-3, proteins, and fats.

Moreover, the nutritional breakdown of hemp also indicates the presence of vitamin C, some B vitamins, and vitamins A and E. While, possible health benefits of consuming hemp include lowering the risk of heart disease and skin disorders as well as improved digestion.

Besides, researchers review of clinical trials on the effect of hemp on reducing symptoms of PMS and Menopause and concluded that its high levels of gamma-linolenic acid may reduce symptoms associated with those issues.

This is also known as guaran and is used to make a variety of processed foods and other foods like soups, yogurt, ice-cream, pudding, and sauces.

Analyzing the research data available online, we have come across some tremendous health benefits of guar gum. Predominantly used as laxative, it is also instrumental in treating diarrhea, irritable bowel syndrome (IBS), obesity, and diabetes. It’s also found in cosmetics and medications.

Other than that, adding guar gum to your diet may help to lower your cholesterol level and taking guar gum by mouth appears to relieve constipation in some people. However, intestine blockage might occur should you not drink enough fluid with the dose of guar gum. 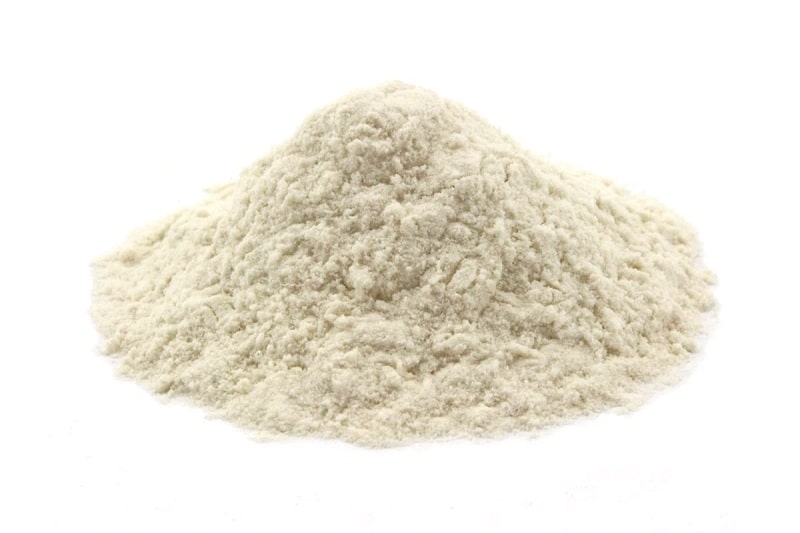 Even though we are presenting Almond flour as a substitute here, it’s a staple ingredient in many diets. Unlike usual flour, it not only just adds bulk in dishes, rather increase the nutritional value in each meal by many fold. In particular, for thicker items such as brownies, it simply works great.

Carbohydrate – one of the key factors that lead to obesity, seems to be very low in almond.  Nonetheless, a healthy dose of fat and protein is due, when you decided to add it in the dish. Apart from fiber it also sources minerals like magnesium and manganese. However, Almond flour can’t be applied to those who are prone to nut allergy. 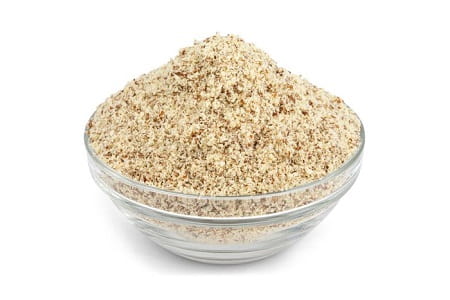 Bland in taste and gluten free, when it comes to substitute psyllium husk potato starch undoubtedly one of the best options. One tablespoon of potato starch is equivalent to an equal amount of psyllium husk. Basically a resistant starch, instead of being digested in the small intestine, it reaches the colon to meet the gut bacteria.

Before converted into powder, potatoes go through crushing in order to reduce the starch content. Considerably improve metabolism and give a boost in your gut microbiome. However, its high in carbohydrate, thus requires consideration prior of substitute psyllium with it. 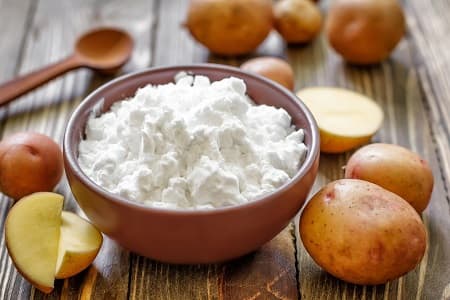 Sourced from the husks of the Psyllium seed and is available in various forms, Psyllium husk yields a bunch of health benefits. Being soluble fiber act as the driving force of its being categorized as a remedy for digestive disorders. Nonetheless, it also said to help with other health issues such as cardiovascular functioning, diabetics, irregular blood pressure, and bowel movements.

Constipation termed as the infrequent movement of the bowel. And, recent studies suggest issues related to constipation are in rise, largely because of the changes taking place in our food habit. However, increasing your intake of soluble fiber may regulate the bowel movement. Psyllium for example, absorbs water in the intestines, swells, and make the stool soft, thus easier to pass.

Hygroscopic properties of Psyllium believed to have a significant contribution in reducing cholesterol level. Besides, the study suggests fiber, especially soluble fiber has notable interference in the uptake of bile acids in the intestines. Which results their excretion in the stool and the liver try to replace them by converting cholesterol. Therefore, lower the level of LDL (bad cholesterol).

Proper heart functioning is directly proportional to the level of cholesterol in your blood as well as blood pressure. And, scientific evidences available in the web from various prestigious sources, including the American Heart Association indicate dietary fiber, in other word psyllium can improve cholesterol, and lower the risk of heart disease.

As a soluble fiber psyllium form viscous compound when consumed, thus, promote a feeling of fullness or satiety. It slows down the stomach emptying and lower the appetite. As an outcome, you ended up with reduced food intake, therefore less calorie consumption, which may result in better weight control.

Some research suggests that the glycemic response of the body to a meal, which is instrumental in reducing insulin and blood sugar levels can get a boost by taking fiber supplements. And, if it happens to be a water soluble fiber, psyllium for example – it works better for this mechanism. In particular, people with type 2 diabetes get the best result.

Irritable Bowel Syndrome (IBS) – a common chronic gastrointestinal disorder caused by, as most studies suggest, insufficient dietary fiber. Psyllium gives you an upper hand in battling out this disorder. In people with IBS, it significantly lessens abdominal discomfort, bloating, and flatulence.

That’s about everything you need to know about psyllium husk powder and its substitutes before including them in your diet. Remember that the substitute may not add the exact taste and texture that you’re looking for and neither is it guaranteed that it will provide similar benefits. It’s, therefore, necessary for you to experiment with the above-listed substitutes before you find what works best for you.

Besides the potential substitutes we have listed, you could also try coconut flour, almond flour, potato starch, rice flour, green banana flour, millet, and sorghum. The list is endless and the alternatives are limitless depending on your dietary needs.